Questionnaires about the use of the system o-fire to protect the camp of Happy Days were distributed in the summer of 2016 to parents who were hosted during the three camps. The questionnaire was accompanied by a corresponding form distributed by the camp upon leaving the facility and was optional. The study involved 83 individuals. 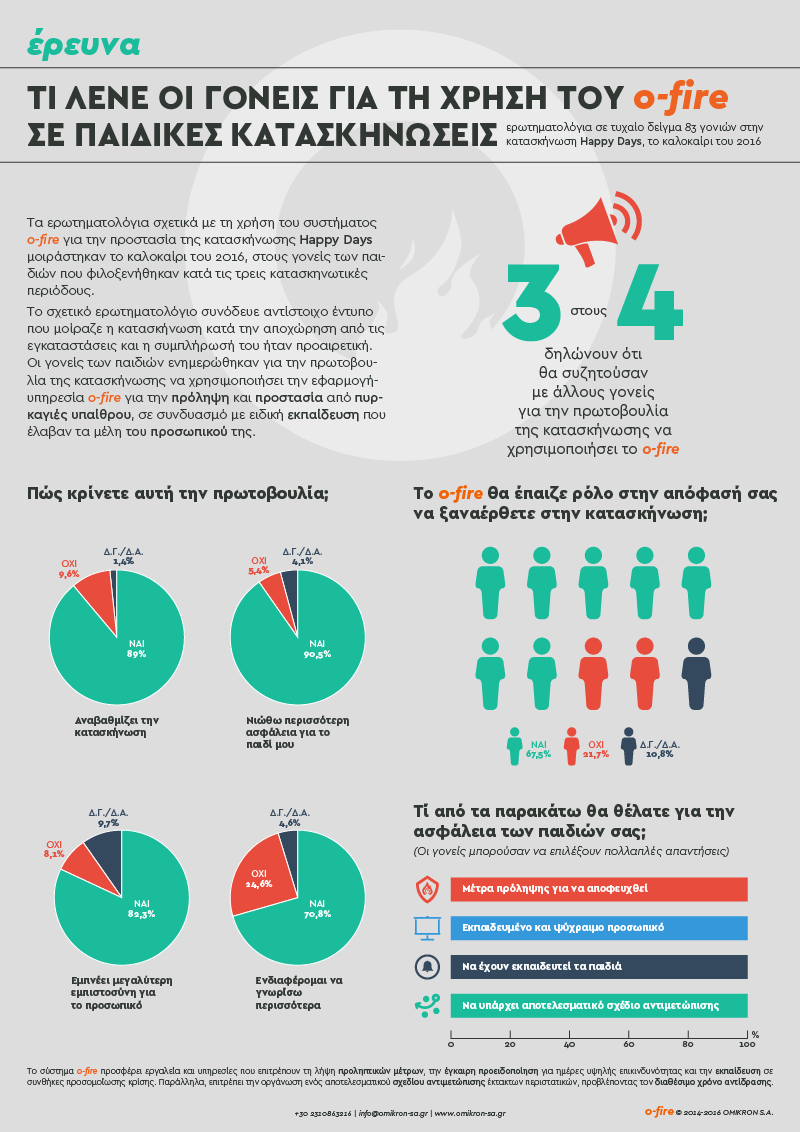 The first set of questions asked the parents' view on the camp initiative to use a wildfire prevention application / service, in combination with the training received by its staff from OMIKRON partners. OMIKRONThe results showed that this movement produced a very positive response. More specifically, about 9 out of 10 said the initiative was upgrading the camp and at the same time feeling more secure for their child. Eight out of ten said they trusted the staff, while 7 out of 10 expressed an interest in knowing more.

In the second part, we asked parents to express their views on how various actions are needed to protect against the risk of fire. Overall, respondents felt that a holistic approach was needed that included both appropriate preventive measures, trained and calm staff, training to prepare children and finally having an effective plan for a crisis event.

About 7 in 10 parents said that using the application/service of o-fire would play a role in their decision to come to camp next year, while 3 in 4 said they would discuss this initiative with other parents.

Note that the sample of those who responded was largely young parents (just over half belonged to the age group of 35-44), which is also reflected in their educational level, which is clearly higher than the general population. Indicatively, 6 out of 10 are university / TEI graduates, while the total population - according to the 2011 Census - is only 22.5%. However, neither of these factors seemed to influence the outcome, as there were no significant differences either between age groups or between different educational levels.

In conclusion, we can say that parents value, as expected, the safety of their children very high. They understand that in order to protect against the risk of a fire, it is just as important to have invested in preventative measures, staff training and children, as well as in devising an effective emergency plan. In this regard, they consider the camp of Happy Days to implement the o-fire to be positive, and this opinion affects both their decision to come next year and their willingness to talk to other parents about the summer camp.

- OMIKRON Environmental Consultants SAwould like to once again thank everyone who participated in the survey, as well as the management of the Happy Days camp for the confidence it has shown us. Happy Days for trusting our company.